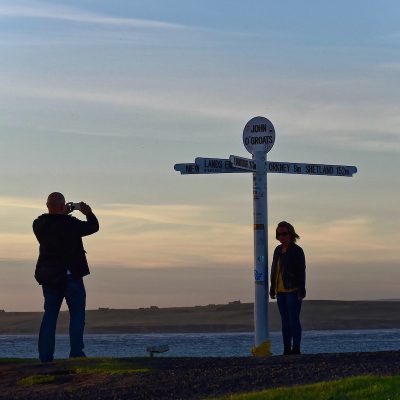 Malachy Devlin, interim operations director at the Scotland 5G Centre, discusses how 5G could be used to boost tourism in Scotland

Ask your family, friends or colleagues about 5G and the vast majority will think it is a continuation of the preceding generations of mobile connectivity – 3G and 4G.

In the popular imagination that largely means faster internet speeds on their phones and being able to send videos on WhatsApp, no matter where you are.

There are few sectors that demonstrate how different 5G could be more than tourism; particularly in Scotland. The technology has transformative potential at a time when Scottish tourism has seldom needed it more, enabling more engaging and rewarding experiences for visitors and ‘staycationers’ while delivering serious financial benefits for local people and businesses alike.

The importance of tourism to Scotland is evident from the statistics. Data from the Scottish Government shows that visitor expenditure totalled £8.9 billion in 2015 – the last available figures – contributing an estimated £6 billion to GDP, equivalent to 4.5% of the total. Tourism-related industries employed 207,000 people in 2016.

Such a level of economic contribution, and the potential impact on this from Covid-19, underlines the imperative behind continued innovation and investment in Scottish tourism – both at an individual business and macro level.

While tourism operators should look at the 5G technology coming available to them and see how they can use the new capabilities to benefit their companies and customers, they need to know that high quality and reliable, nationwide infrastructure is in place to underpin their efforts.

The 5G networks are currently being rolled out and will become more ubiquitous with time; but, as this process unfolds, it is important for companies to understand the enormous potential on offer.

One of the biggest areas of opportunity will be around the use of ‘immersive’ content. In England, for example, 5G has been trialled to allow visitors of the Roman Baths to experience historic reconstructions on a mobile augmented reality (AR) app using 360-degree video.

We are already looking at how this new form of ‘smart tourism’ can be used in Scotland. 5G RuralFirst, a project led by Cisco and the University of Strathclyde alongside other partners, is developing rural testbeds and trials for 5G wireless and mobile connectivity, based in the Orkney Islands, and linking with a new Scotland 5G Centre testbed in the Loch Lomond & Trossachs National Park.

The initiatives include exploring how 5G can provide connectivity to visitors, such as delivering virtual reality (VR) content at tourist and heritage sites across the country.

In cities, there are a range of potential applications too – particularly through the use of Internet of Things (IoT) networks based on 5G connectivity. By placing sensors throughout urban areas, collecting a variety of data, they can be used to look at the flow of people through attractions, events, and even entire cities.

In fact, councils or tourist sites could create their own private 5G networks, guaranteeing service and bandwidth, to check their cities or venues are running smoothly and efficiently. As an example, an integrated network of sensors could provide visitors with directions to vacant car parking spaces that would enable event organisers to monitor congestion and improve safety. Imagine how useful this would be during events such as the Edinburgh Fringe Festival or large football matches.

Further down the line, 5G could also be a boon for tourism by enabling live translations through pop-up networks enabling high-definition coverage and event production at a fraction of the cost required today. Tour guides could communicate with visitors through a system which translates their speech into multiple languages in real-time, through earphones synced to Smart Glasses or other devices – they would not have to struggle with even the broadest Scottish vernacular.

Tourism is extremely important to Scotland – but, to maintain and protect what has been achieved over the past decade or so, we need to embrace new ways of thinking and the next wave of technology that will be enabled by 5G. That may start with immersive content, but it will certainly be much more than that. We cannot afford for others to steal a march on us – the time to explore the possibilities of 5G is now.

This blog, by Malachy Devlin, Interim Operations Director at the Scotland 5G Centre, was published in Digit.FYI in April 2020.

Stay up to date with the latest events and developments at the Scotland 5G Centre.

Any cookies that may not be particularly necessary for the website to function and is used specifically to collect user personal data via analytics, ads, other embedded contents are termed as non-necessary cookies. It is mandatory to procure user consent prior to running these cookies on your website.