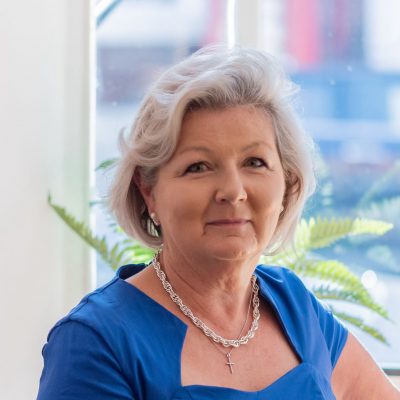 Philip Mason talks to chair of The Scotland 5G Centre Julie Snell about the organisation’s mission to enable broadband across the country, including its most remote communities

As readers of Land Mobile will be aware, the increasing use of broadband for business communications has profound implications, both on the working lives of users as well as the sector itself.

For proof of this, look no further than our feature in the new issue, during which we investigate the ever-more POC-focused nature of the handset market. The increasing reliance on cloud-based ‘remote working’ platforms, meanwhile, has also transformed entire verticals, now making it entirely acceptable, at least for some people, to conduct the majority of their professional life straight from the sofa.

If we thought 4G was a game-changer, however, its imminent successor, otherwise known as 5G, is likely to represent a veritable seismic shift, combining as it does massively increased bandwidth with comparatively infinitesimal latency. Or to put it another way – to paraphrase a famous quote from the very first ‘talkie’ motion picture – we ain’t seen nothing yet.

As promising as 5G is from a business perspective, however, that potential will mean nothing if it is not actually available to use when it comes to coverage. Needless to say – and again, we are not telling readers anything they don’t already know – this is more likely to be an issue in rural environments than in urban ones.

A case in point in relation to this are the more remote areas of Scotland, in particular the areas known as the Highlands and Islands. Step forward The Scotland 5G Centre, a government-funded initiative dedicated, according to its website, to accelerating the “demand, deployment and adoption” of the standard across every area of the country. The organisation’s chair is Julie Snell, who is the subject of this issue’s ‘Big Interview’ section.

Snell began her professional life in the commercial telecommunications sector, a career which included highlights such as writing the business strategy for what became BT’s public Wi-Fi network. Up until last year, she occupied the role of CEO for Bristol is Open, a major, city-wide test bed focusing on the potential use of smart-city technology.

Taking up the story of how she came to become involved in The Scotland 5G Centre, she says: “I stepped down from Bristol just as we were going into lockdown, with the intention of retiring from full-time roles. I’d wanted to move into my non-executive career, but when COVID-19 happened, I thought, well, I’m not likely to be going anywhere for now.

“At that point, The Scotland 5G Centre basically got in contact and recruited me. It was as straightforward as that, and unfortunately I still haven’t visited Scotland yet in my capacity as chair, despite having held umpteen board meetings.”

Anyone keeping an eye on Snell’s career up until this point will notice a definite arc, from the aforementioned private sector towards roles which are much more centred on benefiting society as a whole. This was certainly the case with Bristol is Open, much of which was concerned with the broadband use-case across ‘digital divide’, health and social care. With Scotland 5G, meanwhile, the mission is to ensure that the whole population sees the benefit of what could become a profoundly transformative technology.

Elaborating on this, she says: “Of all the roles I could have wanted, I never imagined that I’d have the opportunity to make a difference at nation level. As with Bristol is Open, the fundamental task is to join industry knowledge together in order to drive connectivity, but this time across an entire country. Doing that will in turn influence how we bring together the multiple business cases, which we’re seeing develop around the use of 5G. The Scottish government has really got its act together when it comes to this area of work.”

Going back to the subject of ‘remote’ connectivity, Snell estimates that around 98 per cent of Scotland is designated as rural or remote rural. Predictably enough, this is not exactly conducive to what she refers to as the traditional (ie, profit-driven) “telco roll-out model” predicated around providing the greatest coverage for the largest market.

This – according to her – is exactly where The Scotland 5G Centre is designated to fit in, finding ways in which all stakeholders can come together “to see a wider, more layered business approach”. One way this is being accomplished is through the establishment of S5GConnect ‘innovation hubs’, such as was recently opened in Dundee. Another is through the establishment of test beds in the rural communities themselves, something which we shall return to later in the article.

Going into greater detail about the business case for The Scotland 5G Centre, Snell says: “When most people think about Scotland, they generally have in mind Glasgow, Edinburgh, Dundee and so on. But the reality of the situation is that around 25 per cent of the income from Scottish business – around £360bn a year – comes from the rural areas.

“These communities are managing to do that with poor connectivity, so imagine what could be achieved if it could be improved. We absolutely cannot allow these amazing farms and fisheries – some of which are still relying on terrestrial phone lines – to fall behind the UK and the rest of the world.”

She illustrates how this could happen through the example of the increasing deployment of connected devices across different facets of the Internet of Things. In this context, this includes developments such as remotely monitored farm machinery, as well as crops and livestock via something which, pleasingly, has come to be known as the Internet of Cows.

As Snell identifies, it would put rural Scottish businesses at considerable disadvantage if they continued to miss out on broadband connectivity in the way that she says is occurring now. Likewise, the connected health and social care piece will become increasingly important, something which also needs to be addressed.

So how does the Scottish government plan to change this situation? What exactly is the strategy, both in the short and the long term?

“The first step,” Snell says, “is making those communities, and Scottish business as a whole, aware of the power of the digital technology itself. An important part of that is the S5GConnect hub programme, which we’re rolling out now in different parts of Scotland.

“The idea is that people can come in and use 5G to better understand what it can do, develop their skills, business cases and so on. To be fair, at this point we don’t have to try that hard to convince them – they already know there is the need.”

She continues: “The other thing we’re doing is setting up connectivity for the more rural communities, again in order to show them what it can do. We recently had a project in Orkney which not only demonstrated the connectivity, but also looked at how to get funding to build a private network and how to form a community company.

“Honestly, we really upped the ante for them. When the time came to switch it off – which we had to, because it was purely for the purposes of R&D – it was actually quite heart-breaking.”

The mention of private networks brings us around to arguably the most important part of the discussion – the connectivity piece itself. After all, given the traditional telco model mentioned above, you have to wonder just how invested MNOs are likely to be, even despite appeals on behalf of the wider Scottish economy. Will it get to the point where setting up their own networks is really the only option left to these rural communities?

“I’d say that there’s work to do in that area, which is where our continuing collaboration with the mobile network operators comes in,” says Snell. “Having said that, the mobile operator business models are already adapting.

“We have to continue to encourage the industry towards network sharing taking place through virtualisation, something you can already detect in Orange and Vodafone’s decision to sell off their tower companies. Again, this is where our work with them is essential, encouraging them to look from a needs-based perspective, such as changes that millions of IoT devices rather than user handsets sending data is going to make.

“In terms of the communities themselves, it is indeed about finding methods through which they can build their own networks if they want to, as in Orkney. It’s a bit glib to say it, but you can almost buy a 5G network off the shelf at this point.

“It’s not straightforward to install, and you need to organise a community company to put it together, but the potential is certainly there.”

The rural communities of Scotland are in clear need of decent broadband connectivity, particularly if they aim to take advantage of the benefits of 5G as it comes to full fruition. The Scotland 5G Centre will be an integral part of that process going forward.