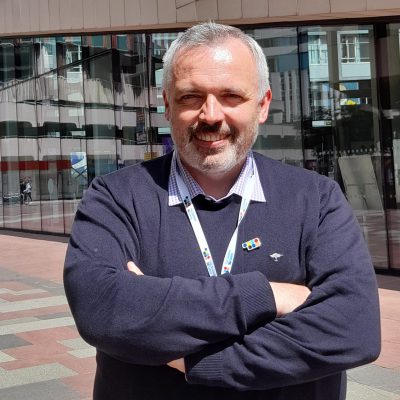 It is definitely Scotland exiting the 1982 World Cup in Spain.  The squad included some of our most famous football names including Alan Hansen, Graeme Souness and Kenny Dalglish.  We needed to win against the Soviet team and the result was a 2-2 draw meaning Scotland, for the third successive World Cup, exited on goal difference.  Even though I was only 5 years old, I was aware of the enormity of the situation and as they say, ‘some scars never heal’.  The experience did set me up for supporting Scotland throughout many more heroic failures.  It also literally kick-started a love of the game.  I took up coaching women’s football and one of my most treasured memories was coaching Queen’s Park Women to a senior league title in 2007.   I have met some amazing young women during my coaching years and am delighted to see the women’s professional game now going from strength to strength.

I would say I was enthusiastic about learning – particularly science, history and sport, but I was unspectacular.  I was interested but lazy and I definitely conformed to the teenager stereotype.   One interesting part of my education was out of the classroom. My father was the janitor at Notre Dame School in Dowanhill, Glasgow.   My family lived near the school as a grace and favour part of his job. My 13 year old self loved the school library.  It was originally an observatory and has a fantastic, elevated position with the most fantastic views of the city.   I loved reading and was drawn to astronomy and science.  I went onto study politics at the university of the West of Scotland, which was good as it also made me pick up a newspaper!

Who would be your dream dinner date?

It would have to be with my wife at a beachfront bar in Hawaii.   We went on our honeymoon and our hotel backed onto Waikiki Beach.   It is a stunning place, a famous surf beach with huge sunsets.   It was over 15 years ago and since then we have had three children and so much has happened.   Both of my sons are autistic. They are fantastic young men, but as you can imagine have their own set of demands and they need lots of time and dedication.  We both have busy careers also and have so many responsibilities.  So, a little trip alone to the beauty of Hawaii would be a welcome break.

I worry constantly that I am not being a good father to my three children.   It is one area of life you can’t particularly train for and it’s such an important role and crucial that you need to succeed.  You go from not being responsible for another human being, other than yourself, to being a parent.  You have to adapt and respond very quickly.   I want my kids to know I tried my best and did what I could for them.

What’s the worst thing that anyone’s ever said to you?

After University I was keen to travel and wear a uniform.  I channelled all my love of adventure novels and joined the Navy.   I did manage to see many countries – 17 in one year.  However, I was also immersed in the Navy military hierarchy structure where you were aware of your status and class.   It was at this time I was told ‘I forgot you were here’.  The feeling of being insignificant is not a great place to be.   I am glad I am now in a working environment which is about collaboration and communication.  If you spend so much time at work you want to feel you are in a safe space, valued and not forgotten.

What’s your most treasured possession?

Now this is an easy one to answer.  I won’t say my family as they are not possessions, but second to them it would have to be my Batman Computing Chair by Secret Lab. It is a lockdown purchase and it’s a custom built gaming chair and perfect for working from home.   It is black, obviously, decorated with large batman logos.  It is ridiculously comfortable with back and neck supports.   It’s very popular and my wife is now ordering her own in pink and without the comic book hero design.

Another easy one and without hesitation it has to be ‘really bad’ action movies.   My absolute favourite is Days of Thunder.  It’s just the best racing film ever and Tom Cruise and Robert Duvall play great roles.   I have it in all formats from VHS to digital with laser disc and Blu-ray in there too.

If you could go back in time, where would you go?

Although I am a lover of history I actually wouldn’t go back very far.  I would choose the Britpop era of the 1990’s.   I loved Oasis, Blur and indie music.  I haven’t been to many concerts, but I remember Oasis at Loch Lomond.  It would also mean I could enjoy Arnie Schwarzenegger at his zenith in the Terminator movies.   What’s not to like?

What’s the last book you read?

It would have to be about technology, and it’s called After Steve: How Apple Became a Trillion-Dollar Company and Lost its Soul.    I am a consumer of Apple products, and I am interested in the development and role of technology.   Apple is the same age as me.  It started 45 years ago.   As a company it single-handedly made consumer electronics more user friendly and stylish.   Steve Jobs was a talisman and a creator and the golden thread that ran through the company.  The book looks at the styles of Tim Cook the new CEO and Johny Ives, Head of Design. The former has masterminded a bull run of success. Whilst Johny Ives had moments of brilliance but lived the high life and eventually burnt out. Apple is making huge amounts of money, but the book does question the culture that exists there now.   It’s a fascinating read.

Why is technology such an interesting subject?

I think technology and sports are similar in terms of the benefits they can provide.    I think they both have the potential to improve peoples’ lives.  Sport is a great leveller and teaches teamwork and gives people opportunities to develop.    Digital technology allows people to communicate and stay connected.  In Scotland that can help if you live in a rural community or if you need healthcare support at home via an app or telecare system.

Technology also gives you access to currency as politicians recognise its ability to improve business competitiveness and boost the economy.   It definitely opens doors to the key ministers

And then we have a small section on preferences:

Salt and vinegar or salt and sauce –  Salt & Vinegar

Cats or dogs –  Neither (dogs at a push)

Night in or night out – Out